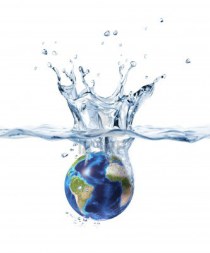 Surface water is just what the name implies; it is water found in a river, lake or other surface impoundment. This water is usually not very high in mineral content, and many times is called "soft water" even though it usually is not.

Surface water is exposed to many different contaminants, such as animal wastes, pesticides, insecticides, industrial wastes, algae and many other organic materials. Even surface water found in a pristine mountain stream possibly contains Giardia or Coliform Bacteria from the feces of wild animals, and should be boiled or disinfected by some means prior to drinking.

Ground Water is that which is trapped beneath the ground. Rain that soaks into the ground, rivers that disappear beneath the earth, melting snow are but a few of the sources that recharge the supply of underground water.

Because of the many sources of recharge, ground water may contain any or all of the contaminants found in surface water as well as the dissolved minerals it picks up during its long stay underground. Waters that contains dissolved minerals, such as calcium and magnesium above certain levels are considered "hard water"

Because water is considered a "solvent," i.e., over time it can break down the ionic bonds that hold most substances together, it tends to dissolve and "gather up" small amounts of whatever it comes in contact with. For instance, in areas of the world where rock such as limestone, gypsum, fluorspar, magnetite, pyrite and magnesite are common, well water is usually very high in calcium content, and therefore considered "hard."

Due to the different characteristics of these two types of water, it is important that you know the source of your water — Surface or Ground. Of the 326 million cubic miles of water on earth, only about 3% of it is fresh water; and 3/4 of that is frozen. Only half of 1% of all water is underground; about 1/50th of 1% of all water is found in lakes and streams. The average human is about 70% water. You can only survive 5 or less days without water.